Owls, no matter the size or status, will always have a special place in my heart. I am sure I do not speak for myself as these nocturnal birds are both mysterious and beautiful. With traits like these you are bound to garner lots of admirers. Anyway, there is a little recreation park just outside Bukit Mertajam township in mainland Penang called Bukit DO that surprisingly houses not one but two species of large owls. For one reason or another, I never got round to visit the site until now. Both the Barred Eagle-owl and Buffy Fish-owl have been showing well of late and the thought having two of these owls at one locality is just too tempting to resist. I had some time to spare on this particular Saturday and since I was in the area, I might as well give it a try. With some pointers from Hor Kee and James Neoh, I found myself at the base of a huge tree where the Barred Eagle-Owls frequent. This place is a popular recreational venue. It was almost two in the afternoon when I arrived at the locality but there were still a number of walkers present. And when you carry gear like mine and constantly stare upwards, you are bound to attract unwanted attention. Once again, I would like to stress I am not antisocial but I do prefer to do my birding in peace. It is also probably why I have not visited this site till now. Despite a careful sweep of the area, I could not locate the owls. Although this species is not new to me, I cannot help but to feel a little disappointed. 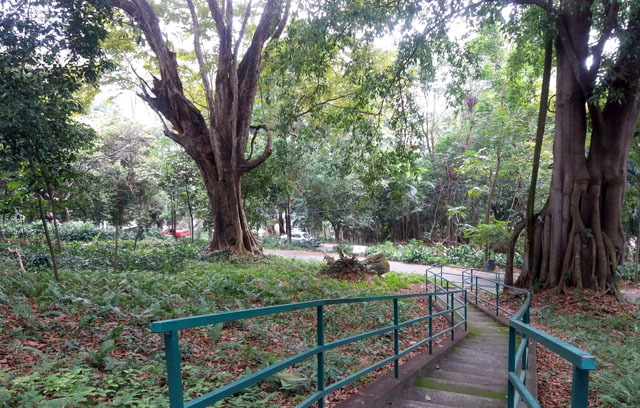 Just down the road the Buffy Fish-owl has apparently taken up refuge. Lucky for me, it did not take long for me to locate it. The lighting was disappointing but I am glad the quick visit here was not a total washout. The Buffy Fish-owl is easily the commonest of our large owls but I have yet to grow tired of being in its presence. 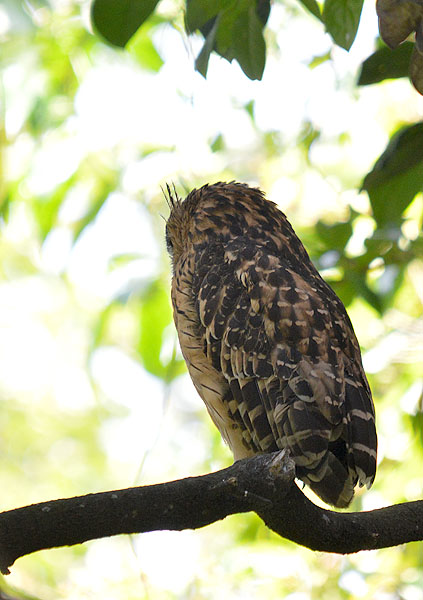 I moved to flank the owl in my effort to obtain a better image and was rewarded. A small gap in the vegetation was my saviour. The owl, now unobstructed and in much better lighting, was an impressive creature to observe and photograph. I was also at a comfortable distance for the owl as it soon lost interest with this cumbersome human trespassing into its territory. 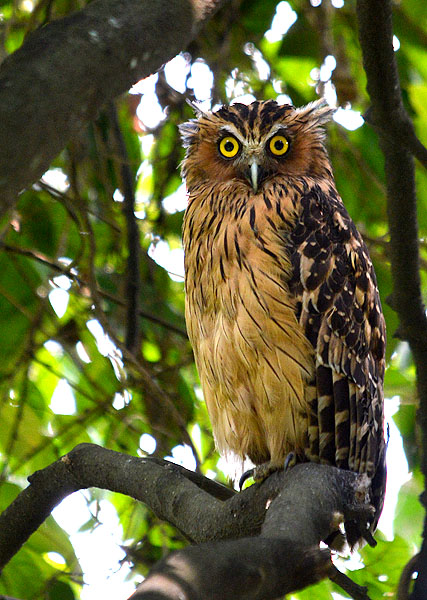 Some movement from a nearby branch turned out to be a second owl that was there the whole time and yet, managed to slip past my radar. I guess I was too preoccupied with the first owl to take notice of it and it was a youngster judging from the paler colouration. My day certainly just got a whole lot better… 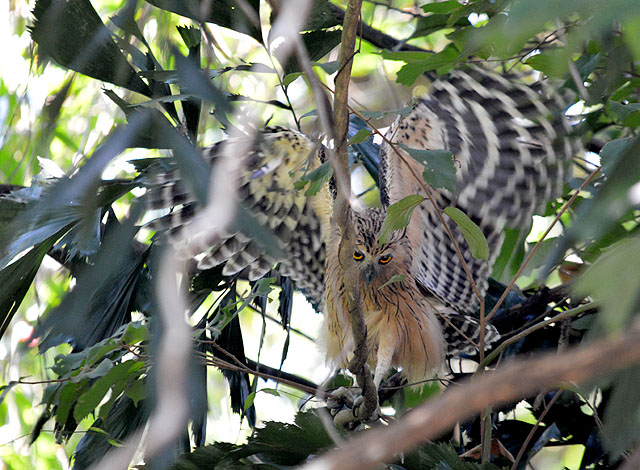 Initially, it was suspicious of my presence and peered at me from its slightly hidden perch. I tried to appear to be as harmless as possible and slowly repositioned myself to capture its images. 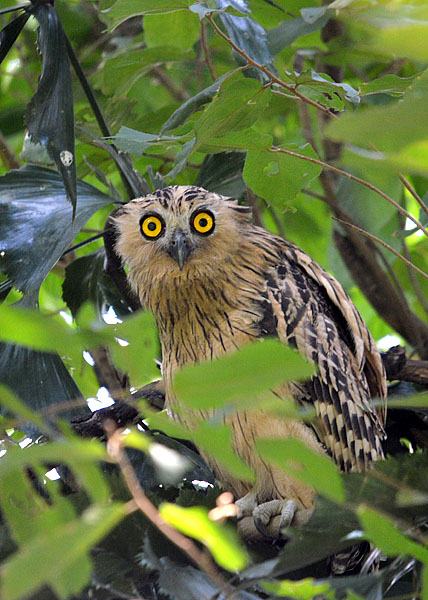 Gradually, its suspicion grew into curiosity. Much to my surprise, it flew and alighted on an exposed perch in front of me. I took a step back. This may not be a good thing. The parent bird surely must be watching this intently. Owls are very capable of inflicting harm to humans and the unfortunate case of an ornithologist losing an eye to his main passion in life is a grim reminder. A quick glance at the parent bird revealed no such intentions and I continued to soak in this memorable experience. Owls are truly remarkable birds and I am glad to have visited this modest location for its nocturnal inhabitants. The encounter left me feeling hopeful for bird life that has found a way to survive within such close proximity of humans. It may not be their preferred choice but it could well be the only one left for some of them. 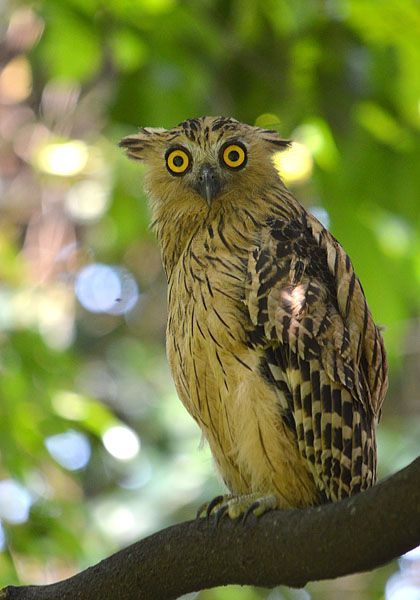 It was a gloomy morning at Sungai Sedim when I started off my first birding excursion for the year. Definitely not the kind of start one wishes for. I am not sure if it was the cold air or the coming rains but the birds were not out and about. I had to work hard to show some forest denizens to my British guest, Rod. It was not a total let down as we did managed to experience some of the bird life here but it could have been better. A lone Crested Goshawk perched aloft a tall dead tree provided the only photo from this locality for me. As the raptor gazed towards the approaching rain clouds with a sense of uncertainty, we birders knew what had to be done and it was to seek better pastures elsewhere. 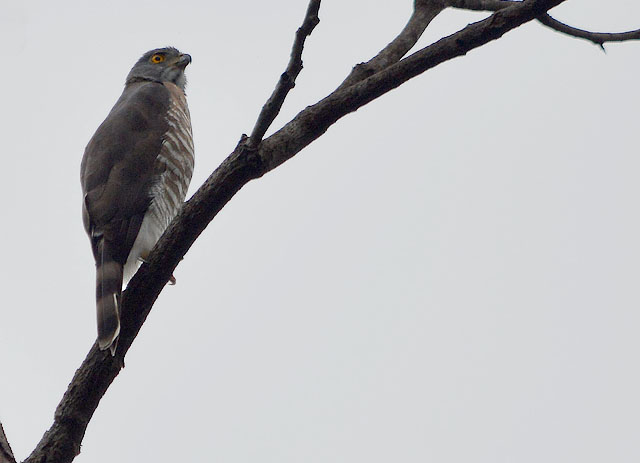 A detour to check on the Barred Eagle-owls of Kulim has become part of the routine after any visit to the forest of Sungai Sedim. The weather improved very little and the light drizzle made this roosting owl even more sluggish. A quick glance over the shoulder to make sure what these humans were up to was all the owl was able to muster. And it was back to sweet slumber from then on. 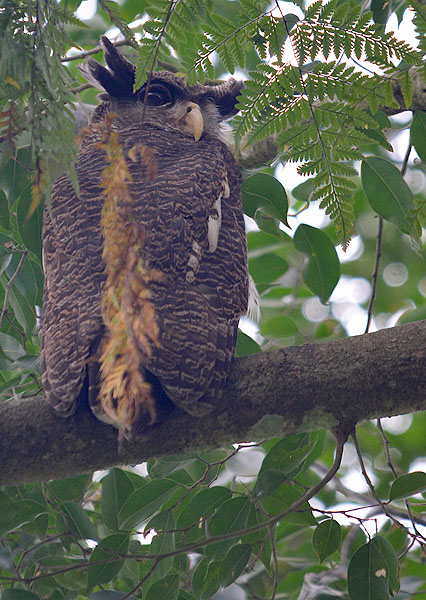 The waders at Bagan Belat have certainly found a new area to roost and feed. My last visit here was a disappointment as the regular thousands of roosting waders were absent. The outcome today was the same and the magic of Penang’s only Important Bird Area could be drawing to an end. The foul weather trailed us all the way to Air Hitam Dalam. The Mangrove Blue Flycatcher did his best to try brightened up a gloomy day and despite the rain, performed admirably for a couple of visiting birders. The last destination for the day was the paddy fields of Permatang Pauh in mainland Penang. Even from a distant, the pale colouration of the White-shouldered Starlings stood out like a beacon in the dark as they foraged among a clump of medium-sized trees in the middle of the fields. After the umpteen time, I was elated I managed to capture the images of this rare migrant. It may not be what one would consider to be a quality shot of this handsome male but I am not complaining. The day was finally turning around and so did the weather. 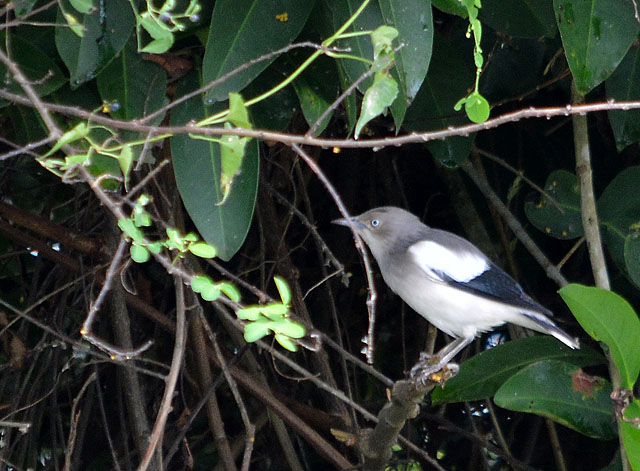 A drab-looking starling was next to held my attention and I knew it was the juvenile Rosy Starling that has been entertaining birders for the past week or so. For the second time this season, the Rosy Starling firmed took its place in my birding excursions. One thing that I have noticed about this scarce migrant is its preference to forage on the ground and often enough it can be seen together with mynas and not other starlings. However, its choice of company this time is somewhat questionable – a Brown Shrike. 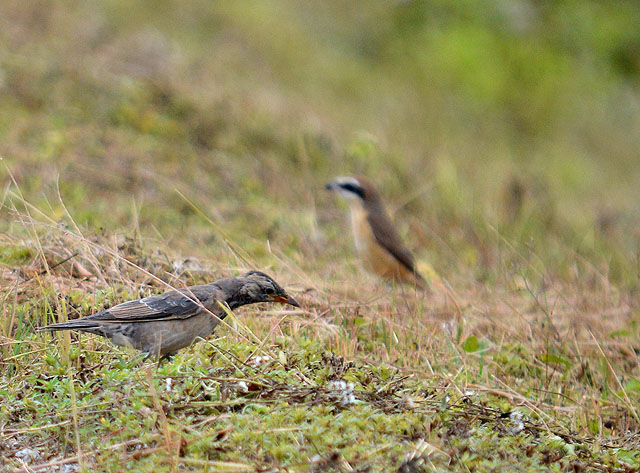 Unfortunately, the one starling that I was really hoping to see remained elusive. A careful and tedious sweep of the flocks of Daurian Starlings present could not produce the desired male Chestnut-cheeked Starling. The sky began to darken again and rain was emanon. A lone female Daurian Starling that stayed back at a berry bush instead of joining others of her kin at a roosting tree found her way to my memory card. 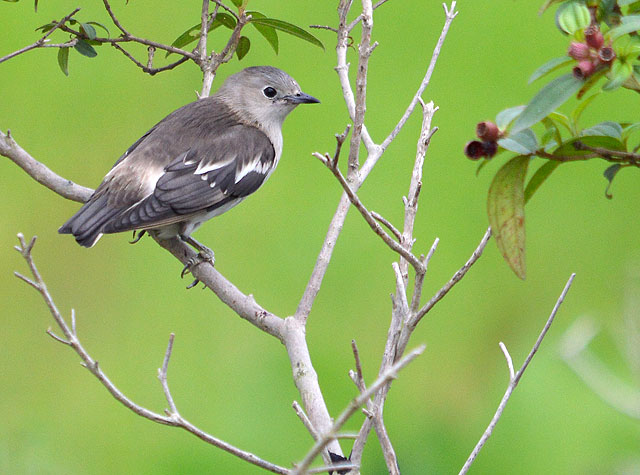 A number of Pink-necked Pigeons were also present at the locality. They continued to feast on the berries despite the rain drops that have now trickled down from the heavens above. This species may be the commonest of our green pigeons but the male is undeniably striking. It would have been a sin if we did not spend time observing the water birds that were present today as well. Temminck’s Stint, Grey-headed Lapwings and Black-winged Stilts may be regular migrants here but they certainly deserve some affection. 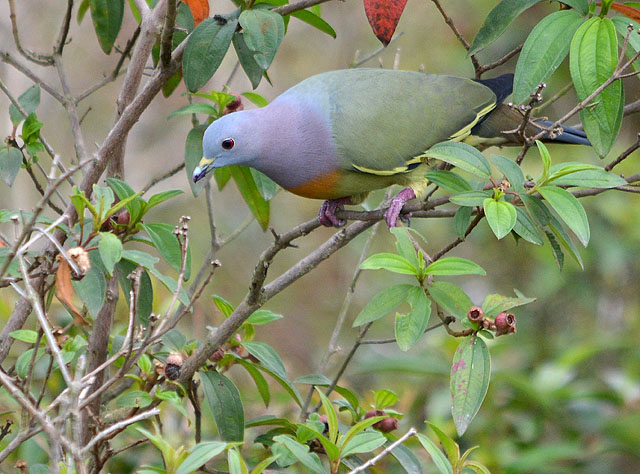