The state of Perlis is capable of producing birding surprises due to its close proximity with neighbouring Thailand and the fact it houses some of the least explored birding sites in the country. The commencement of the migratory season is always a good time for a trip up to the northernmost tip of the peninsular and together with Hock Kee and Michael, we arrived at the border post of Wang Kelian in good time. I guess it is a blessing that this is not a popular entry point into Thailand. A crowd would have hindered our efforts to try for Malaysia’s first record of the Vernal Hanging-Parrot – a species missing from our checklist despite occurring just beyond the border. There was a healthy numbers of Blue-crowned Hanging-Parrots in the vicinity and every flock was given its due attention. In the end, they were the only parrot species present. The male Blue-crowned Hanging-Parrots are absolutely adorable and striking as well but they hardly provided any good photographic opportunities. And I had to settle for record shots this time. 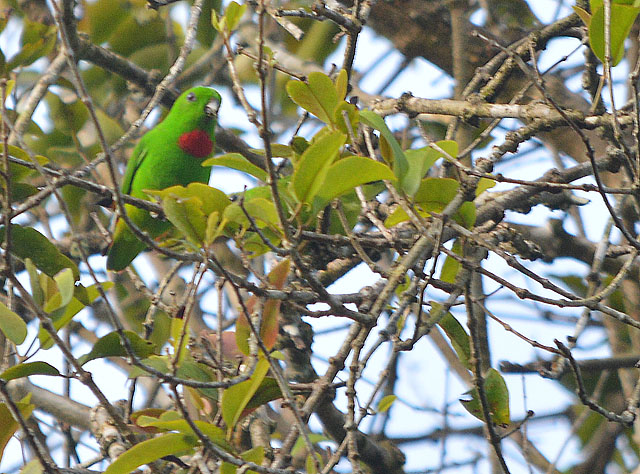 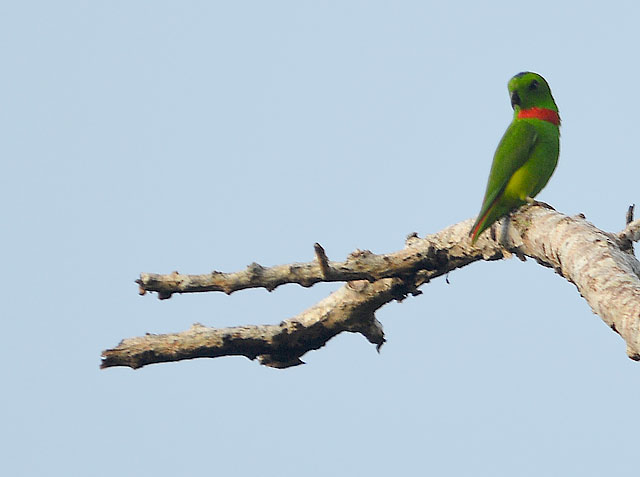 There is a phrase that I adhere to when it comes to birding and it is known as Murphy’s Law. Out of all the parrots present, a plain juvenile proved to be most confiding and outperformed the better looking adults. Murphy’s Law? You bet it is... 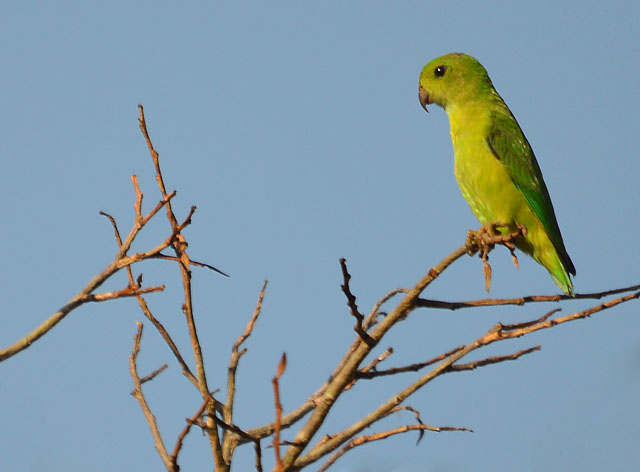 Perlis State Park is not usually part of my birding circuit nowadays as I find the bird activities there relatively low. The revised admission rate for cameras just became another hindrance because it is simply exorbitant. Having said that, this park still has the potential of providing Peninsular Malaysia’s first Fulvous-chested Jungle-Flycatcher as it is found in the forest on the other side of the border. This and the possibility of other interesting passage migrants was good enough a motivation for me to enter the borders of this park again after a lapse of three years. 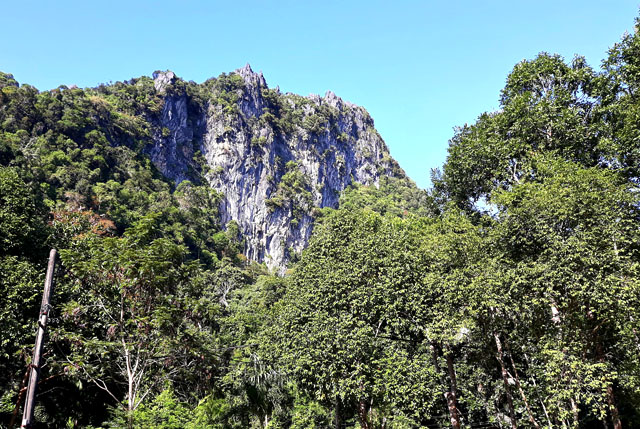 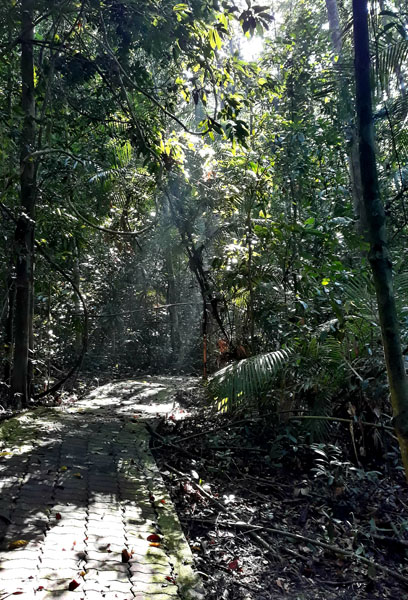 Luckily, it was a decision I did not live to regret. The number of passage migrants present were overwhelming to say the least. This fallout was like something out of the movies. To be more precise, the movie The Big Year. Although not quite in the same magnitude, it is probably as good as it will get in real life here in Malaysia. Throughout the morning, we saw around 20 individuals of Amur Paradise-Flycatchers. I am quite sure this is the biggest number I have ever seen in a single day and it was almost surreal. On one occasion, we found ourselves surrounded by at least four of these elegant flycatchers. Unfortunately they in turn, were surrounded by branches. It was a vicious cycle. The dense vegetation and the active nature of the birds hampered most of my photographic efforts. 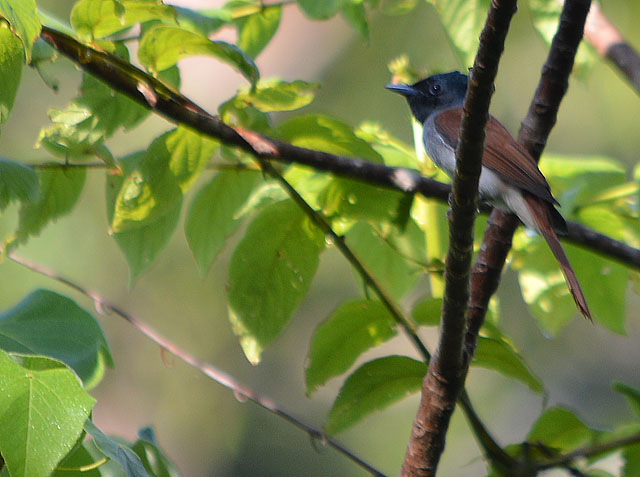 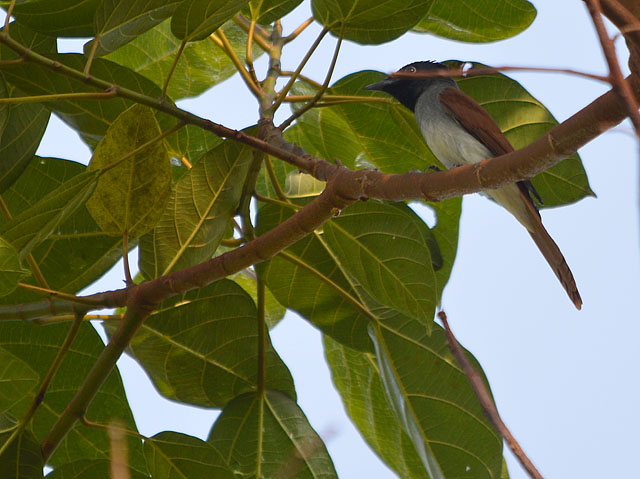 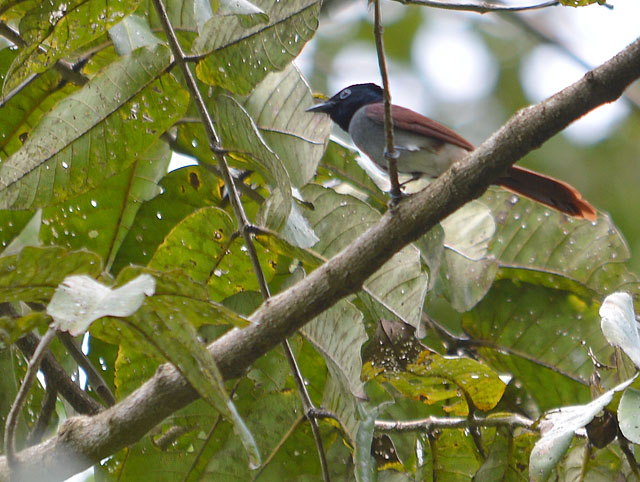 My lucky break came when one Amur Paradise-Flycatcher foraged lower than the others and alighted briefly on an exposed perch. And I obtained, what would be, my best image of this flycatcher phenomenon. 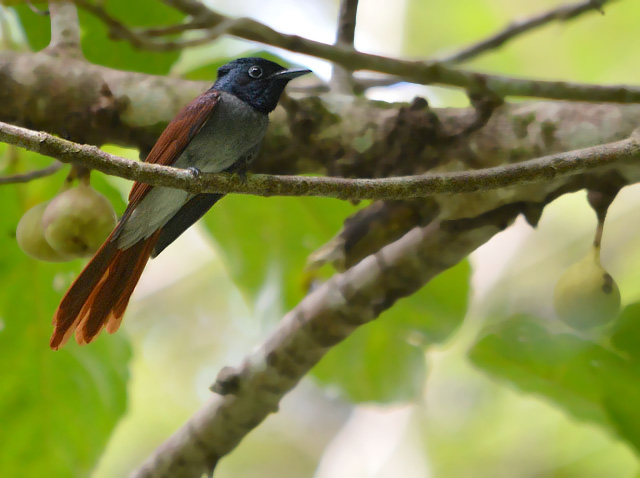 There were a few white-phased males present as well and I have long yearned for a reasonably good photo of one with the long flowing tail and all. To my dismay, all of them were lacking the long streamers. 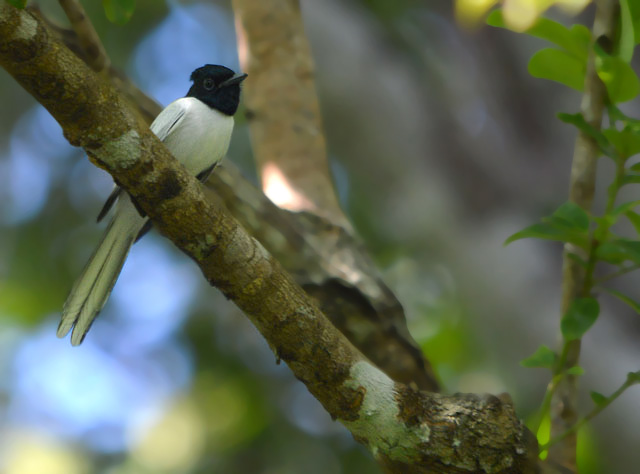 Even without streamers, the white males are still a feast for the eyes. It is the only passerine with an almost full white plumage that occurs in the forest of Malaysia and it literally floats through the foliage of the forest when in search of prey. Anyway, there was one with the elongated tail feathers but he managed to give me the slip only to be seen by Hor Kee alone.  You guessed it - Murphy’s Law. 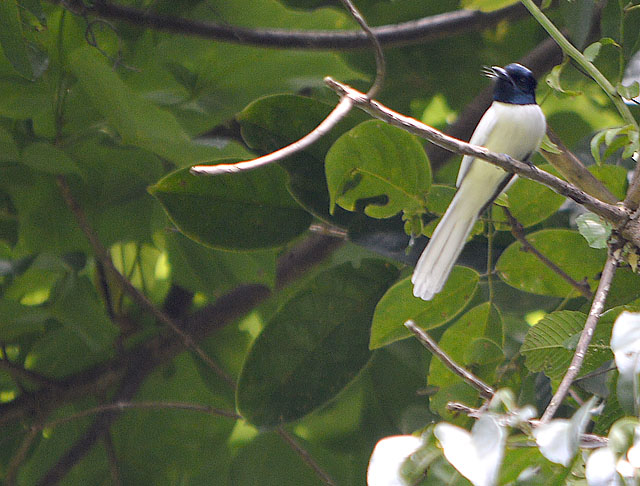 As for our quest for the Fulvous-chested Jungle-Flycatcher, it was another futile attempt just like the Vernal Hanging-Parrots in the morning. But the encounters with not one but three Brown-chested Jungle-Flycatchers minutes apart fully compensated our disappointment or mine at least. This would be my third ever encounter after all these years of birding because I do not have much luck with this uncommon migrant. It has a preference for the darkest parts of the forest understorey and inevitably, both my gear and I were put to the test. Judging from the quality of the photo, I do not see the need to elaborate more on the matter. 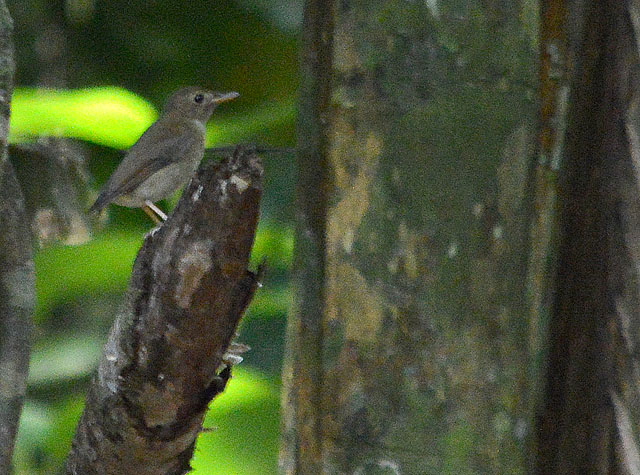 I managed slightly better images from our second encounter but they were still nothing to shout about. When we encountered the third individual in almost identical conditions, I gave up shooting altogether and enjoyed the moment old school way - through binoculars. 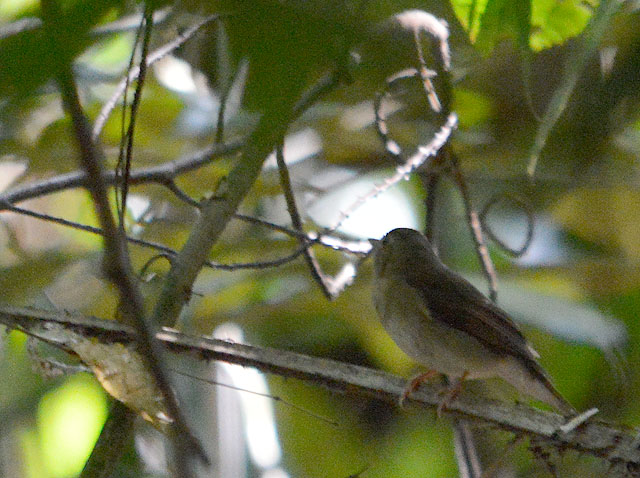 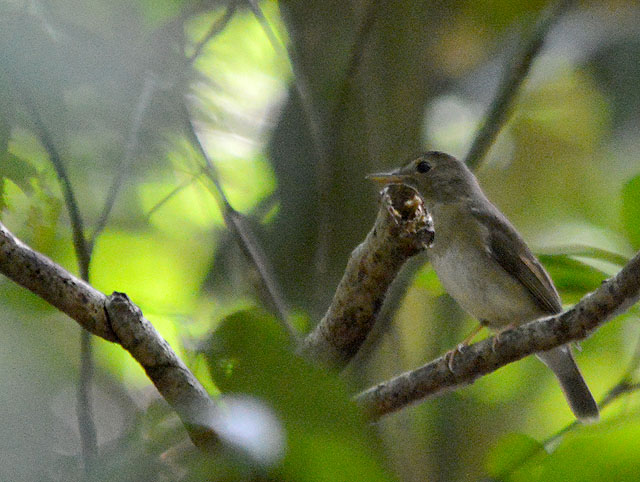 The fallout was not all flycatchers though. We saw a number of Tiger Shrikes as well. The majority seen were juveniles and the absence of the eye mask literally make their eyes pop out. 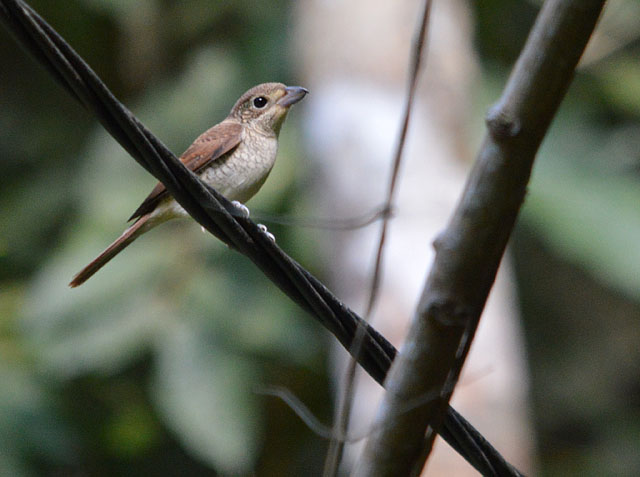 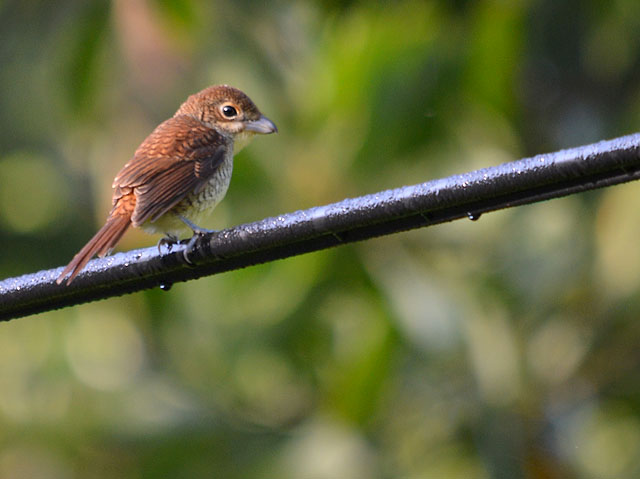 There was one adult male and he was still sporting some of his stunning summer plumage. Like all the other passage migrants, these stopovers is where the Tiger Shrike refuel for the remaining part of their migration. And a juicy Katydid will certainly do. 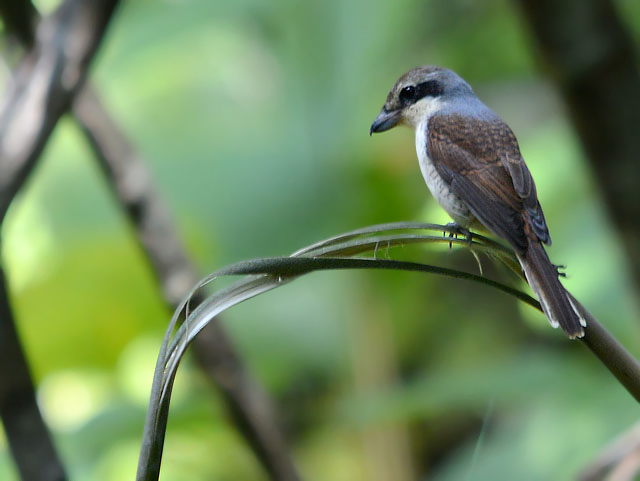 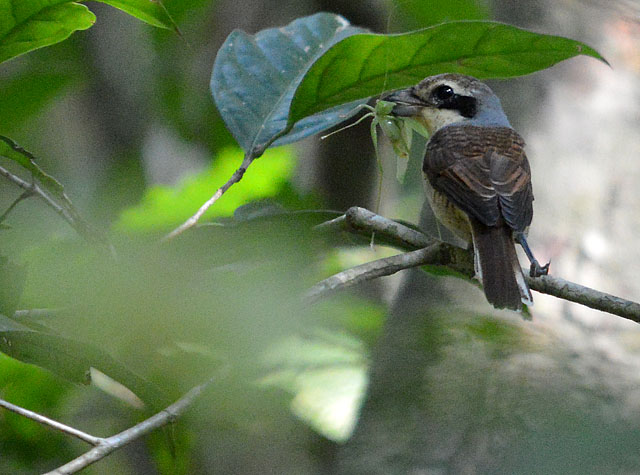 Brown Shrikes were plentiful too and for some of these common migrants, they have reached their wintering ground here in Perlis state. 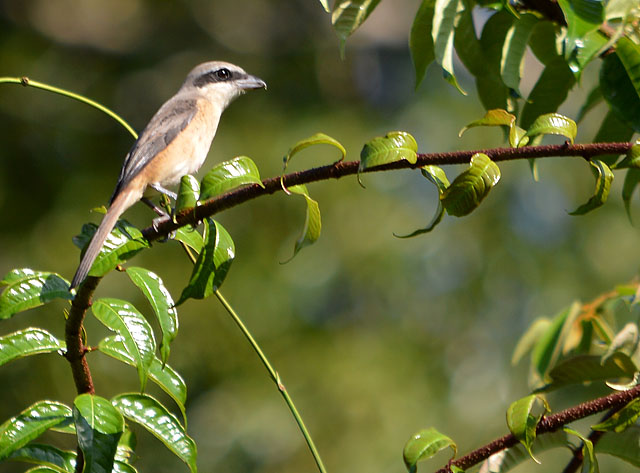 I did not expect much from the resident species found here in the park as they are far and few. The appearance of male Lesser Cuckooshrike during one of the few small birdwaves certainly had our attention. After all, the almost similar-looking Black-winged Cuckooshrike has yet to cross the border into Malaysia. 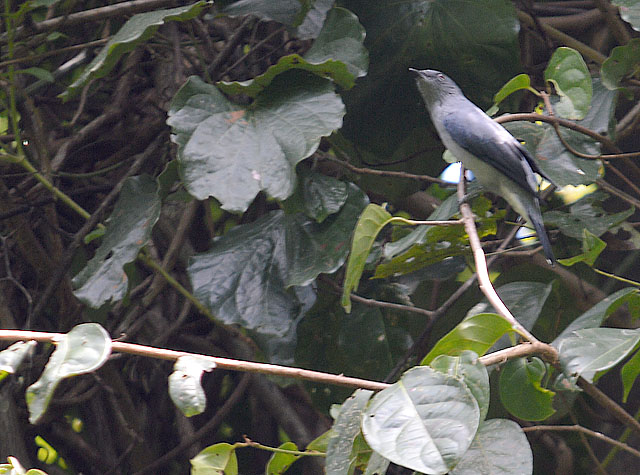 On the way back, we swung by the vast open country of Chuping. It was still a little early in the year for this location but we were hoping to catch some passage migrants there as well. The landscape has not changed much from last season and I am most grateful for that. 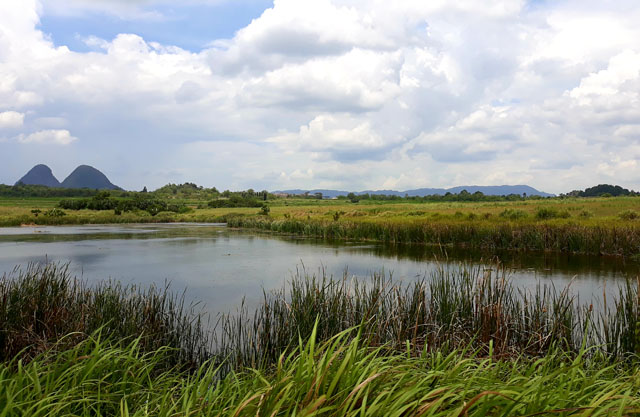 It was good to see the local population of Little Grebes making a comeback at the lake area. At one time, it was difficult just even to see one here. Now, you can find dozens paddling about without much effort. 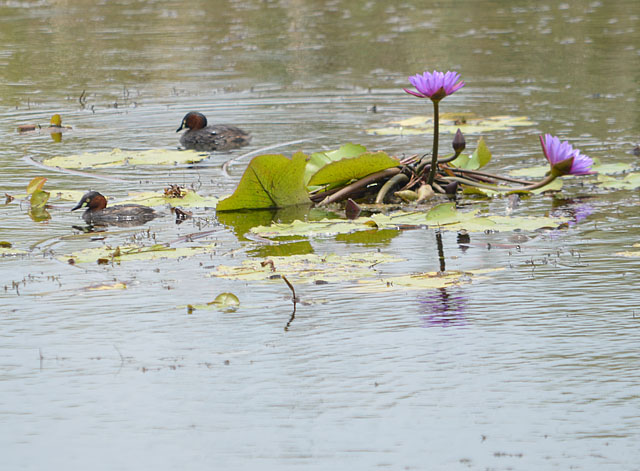 It comes as no surprise that to wrap things up for the day was another migrant flycatcher. The Asian Brown Flycatcher may be the commonest flycatcher of all the migrants but we still had to put it under scrutiny to avoid mistaking a rarer species for it because these flycatchers can look frustratingly similar. 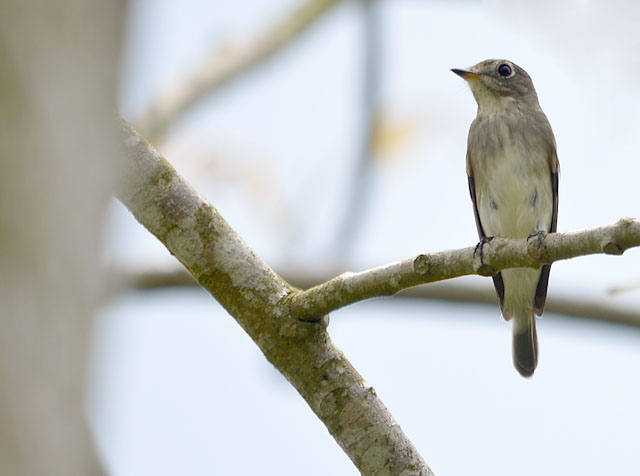