Back to square one

I reached the freshwater swamp forest of Air Hitam Dalam just in time to catch a blazing sunrise. However, the scenery could not keep me captivated for long because the dawn chorus was exceptional and most came from the dimly lighted undergrowth of the forest. For a small bird, the Ashy Tailorbird can be surprisingly loud. I am sure that this male was foraging but he was singing from the top of his lungs the whole time. The shooting condition was truly testing and the active nature of this little fellow did not help with my photographic attempts at all. But I am happy with the results of some of my images. 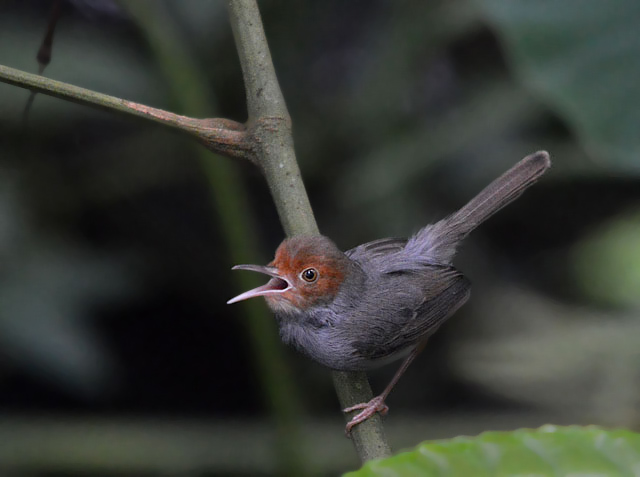 Competing with the tailorbirds this morning were the Abbott’s Babblers with their persistent whistling. Their cheerful song is a pleasant offering to my sense of sound and an individual that alighted on a slightly exposed perch provided the only photographic opportunity for the encounter. 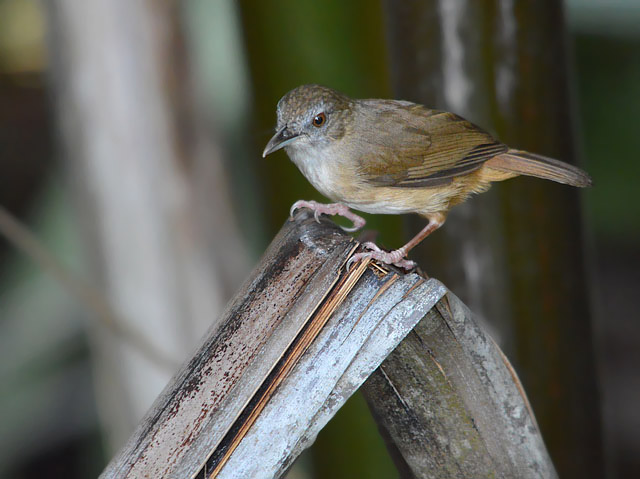 The migratory Brown Shrike, on the other hand, preferred a well-lighted environment from which to hunt breakfast. This feisty winter visitor certainly took notice of my intrusion and its uneasiness put a stop to my intentions of trying to reduce the distance between us. 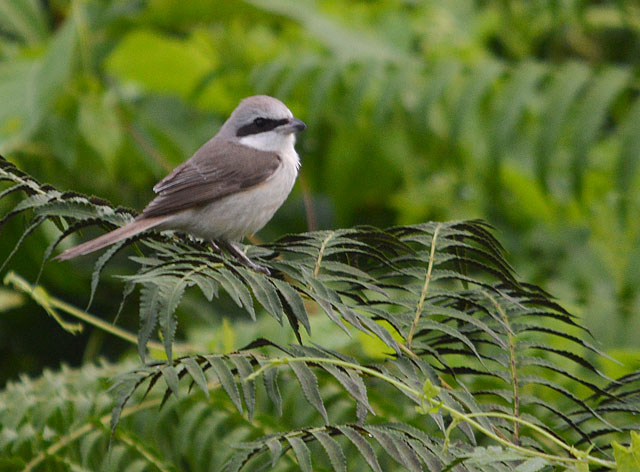 And when it comes to being skittish, very few open country birds can rival the Black-capped Kingfisher. Splendid in appearance but shy in nature, distant images like this one is what one will usually end up with at the end of it all. Anyway, fishing was good at that particular spot and the kingfisher returned to the same perch after several successful dives. I sat comfortably in a gazebo across the river and enjoyed the encounter despite unable to obtain any good images. 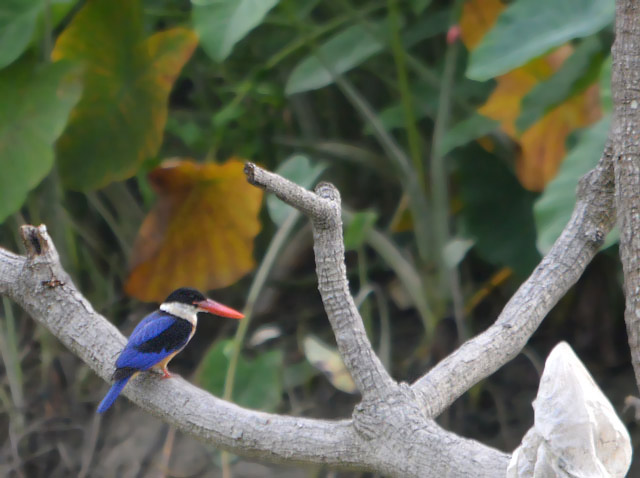 While the Black-capped Kingfisher was well on its way to concluding breakfast, this lone Pond-Heron was still resting above the swamp forest watching life go by. Hunger will soon kick it and it will join the rest of its kin in the adjacent paddy fields. 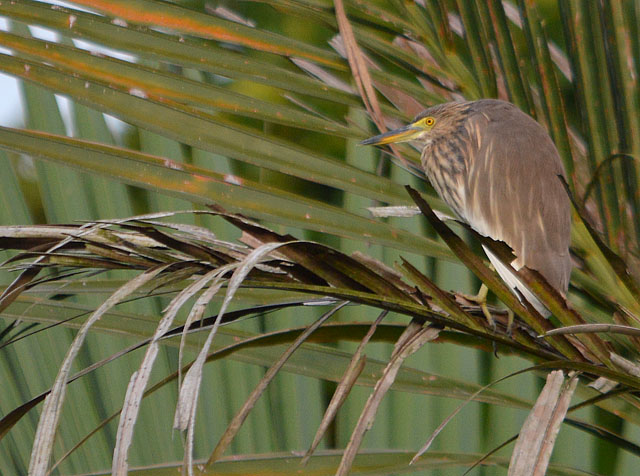 Flocks of Asian Openbills were making their way from their roost to their feeding areas and this is a regular sight for the location each morning. Two of these unique storks descended onto the muddy river bank to feed and since I was reasonably close by, they had my momentary attention. 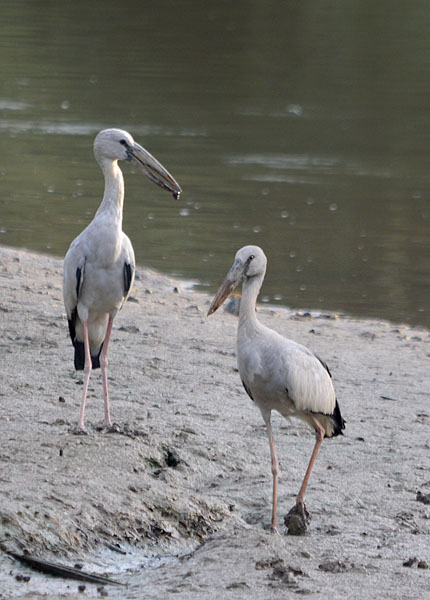 A House Crow contemplating who to torment on this sunny Saturday morning as it perched on the top of the forest canopy. 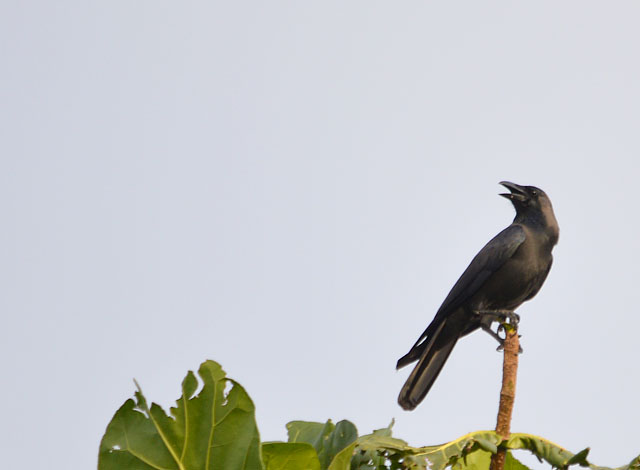 Timid, medium-sized raptors are usually on the receiving end of the harassment and a Brahminy Kite certainly fits the bill. 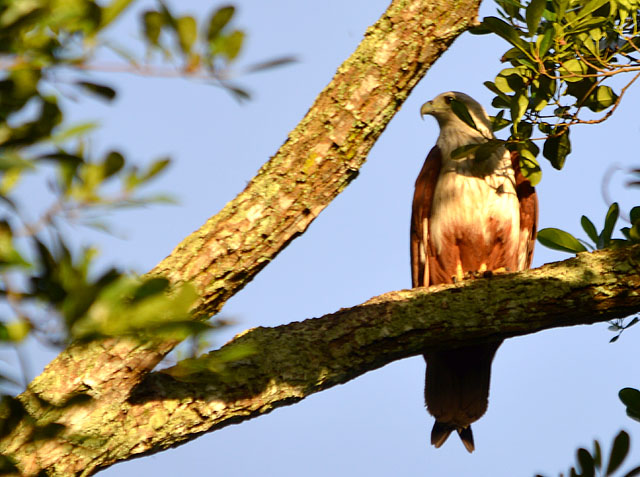 My last visit here was back in October last year and the landscape appears to be teeming now. It could be just a case of absence making the heart grow fonder but the refreshing ambience was much welcomed nevertheless. 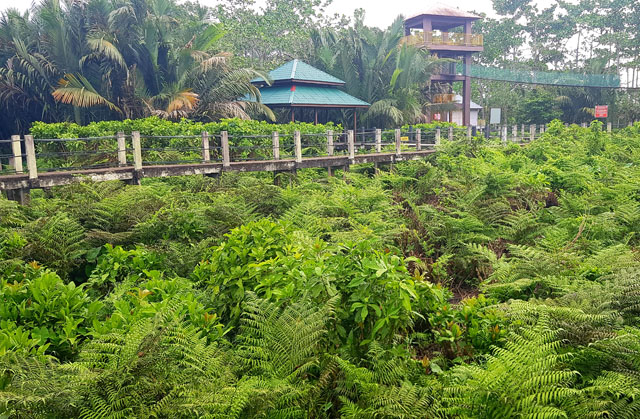 I noticed that certain sections of the boardwalk have undergone some refurbishment. Every effort taken to maintain this site deserves some acknowledgement and the black pillars do somewhat standout. 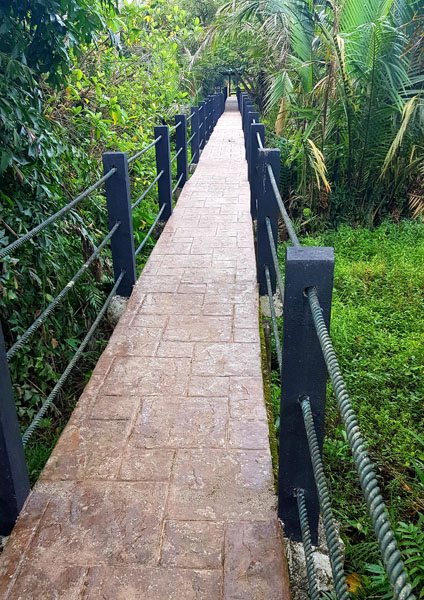 Not everyone shares my sentiment for the pillars and one of the locals still prefers the feel of unpainted concrete. Plaintive Squirrels continue to thrive here and a big number was seen as usual. 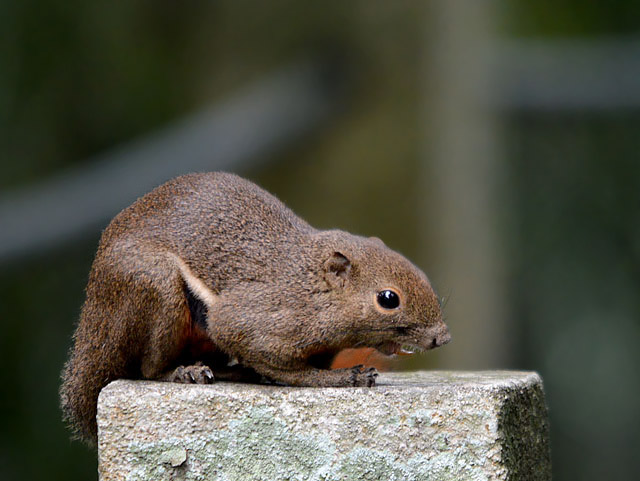 A rather confiding butterfly greeted me as I started to explore beyond the boundaries of this reserve. However, a nearby tree dead appeared to be a centre of bird activities and my interest was immediately diverted – naturally. 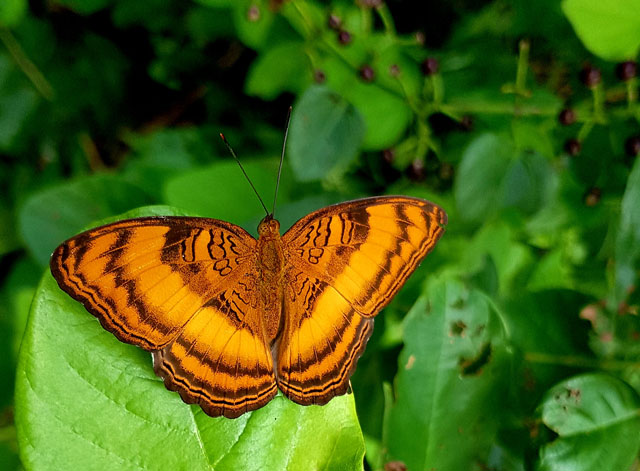 I soon realized that all the avian movements that caught my eye were the doings of a pair of Sunda Woodpeckers and this riverside dead tree seemed to have their undivided attention. I find these minute woodpeckers to be adorable and today, they performed much longer than I anticipated. Not that I am complaining. 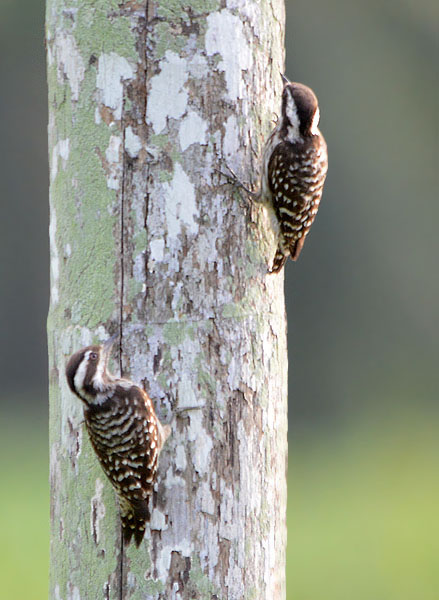 They appeared to be enjoying the moment as much as I with constant breaks to rest and preen in between foraging. 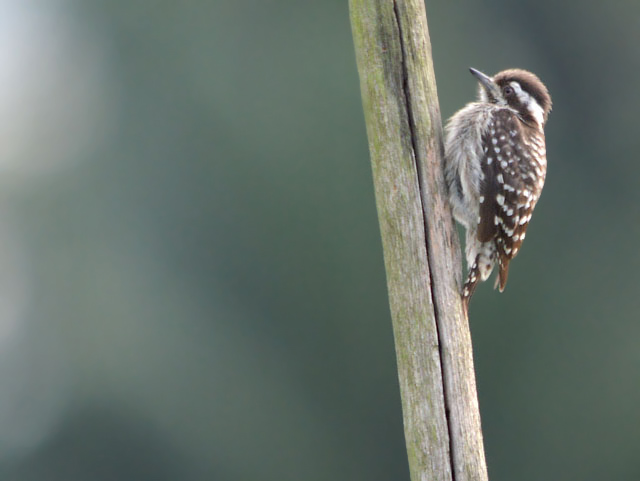 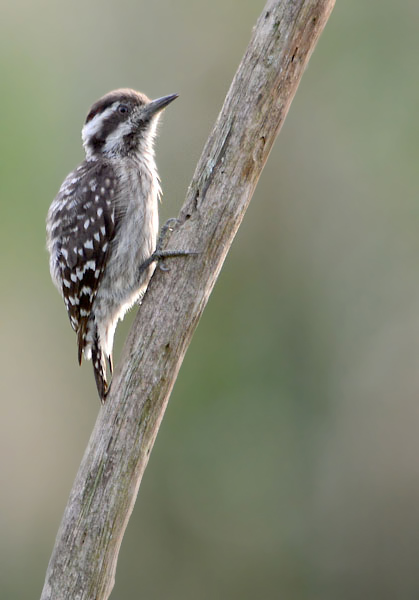 The Sunda Woodpecker can be accommodating at times and this is certainly one of those times. The pair was slightly backlighted and there was no way to improve my position without wading into the river and brave God knows what that may be lurking beneath the murky water. Adorable can only take you so far in my book and the status of the Sunda Woodpecker could not warrant such a drastic course of action. 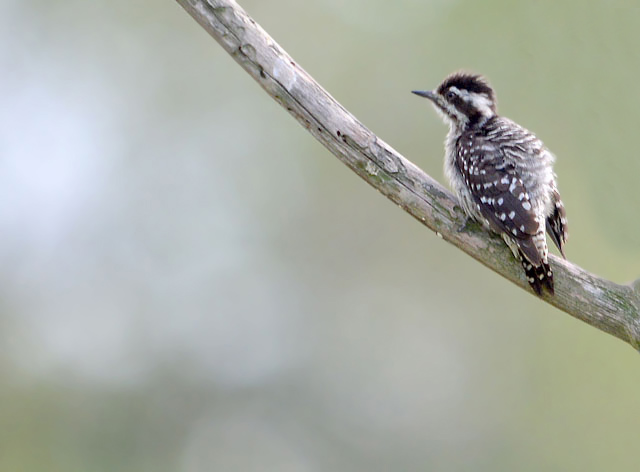 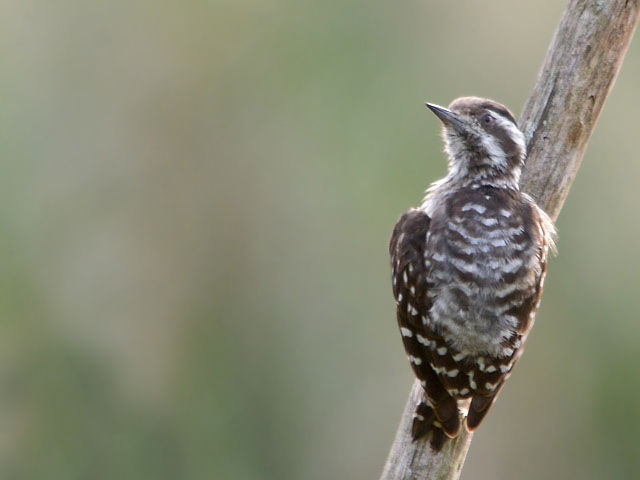 Barn Swallows occasionally swooped in for a rest on the same tree and their presence did not bother the foraging pair at all. 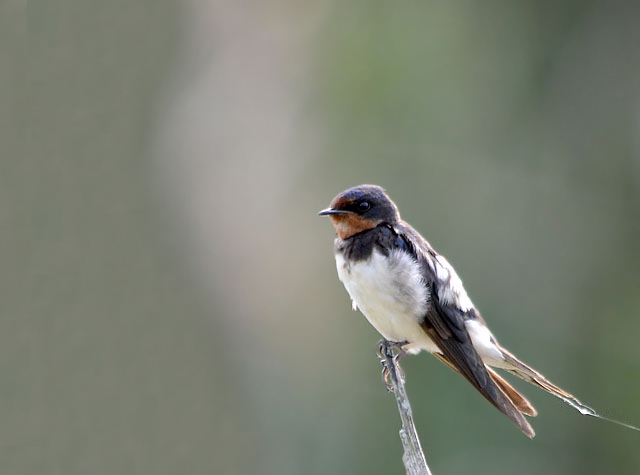 On another dead tree, a Lineated Barbet was proclaiming its territory vocally. The direction of the light may be much better but it was a taller tree. This, ladies and gentlemen, is the joy of wild bird photography. Most things are beyond your control and you just have to roll with the punches. 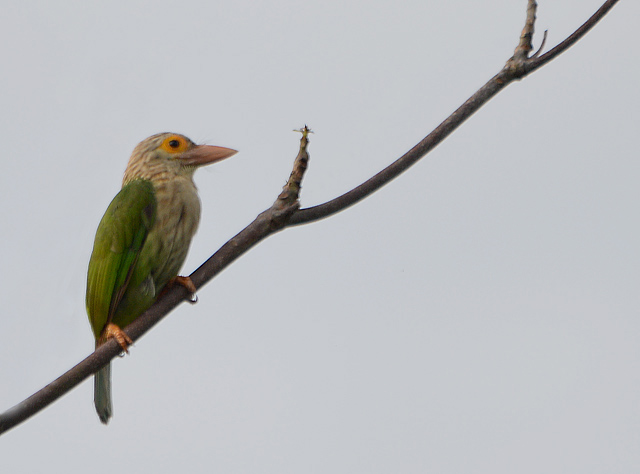 All was not lost when a bird suddenly alighted nearby and it turned out to be a female Common Flameback. Like the Sunda Woodpecker, it is a common species as well but that did not stop me from taking the time to admire her striking beauty. 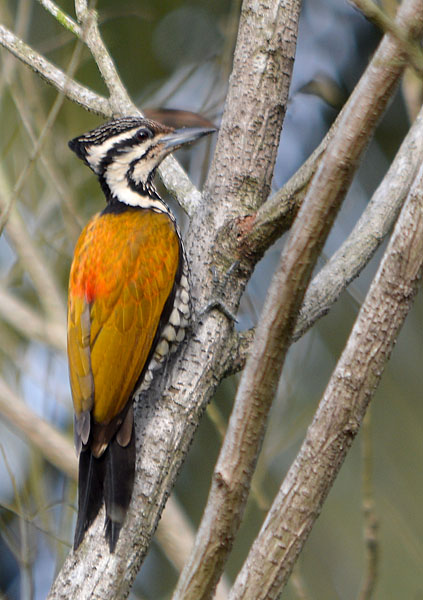 The dead trees in this vicinity somehow seemed to be drawing in the birds and I lingered in the vicinity hoping for more. The next bird, glided in gracefully with its incredibly long tail trailing behind. I know very well that the Green-billed Malkoha is usually restless especially when out in the open. This tree was especially branchy and prevented unobstructed images to be obtained. But this stunner is always a mesmerizing bird to come across regardless of any conditions. 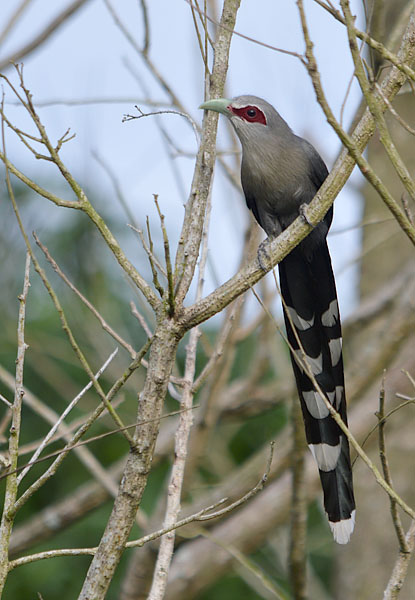 I was about to call it a day when I walked past the usual roosting tree of the resident Spotted Wood-Owls. Despite their enormous stature, the dense foliage can hide them well. Well enough to get the better of yours truly on a few occasions. Today, I could only locate one bird and the gaps in the vegetation were my only window to observe this nocturnal hunter. But every daytime encounter with an owl never ceases to amaze and thrill. 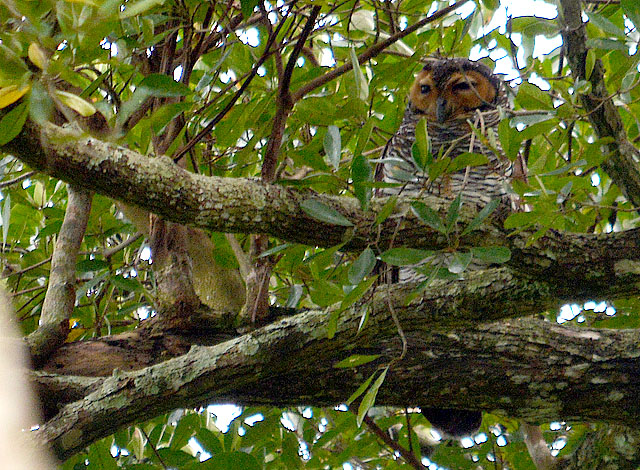 Just in case you are wondering, the title of this post has absolutely nothing to do with the birds nor birding on that day. At the time of writing, the Malaysian government declared partial lockdown again with about two months to go before it is one year since the coronavirus spread its way into our lives and every Malaysian had to endure a lockdown for the very first time. So, it is back to square one and I do not have the faintest idea when this order will be lifted again. Hopefully everyone does what they are supposed to do and we can once again live (and go birding) with unconditional freedom.