There was only one reason I found myself at the swamp forest of Air Hitam Dalam in mainland Penang for the second consecutive time and it was to attempt for the rare migratory Slaty-legged Crake again. In fact, it could well be my final try as spring migration will draw to a close soon. This species would be a significant addition to my life list and naturally, anxiety was high despite my calm appearance. After all birding is about luck and lady luck has been unkind to me so far. 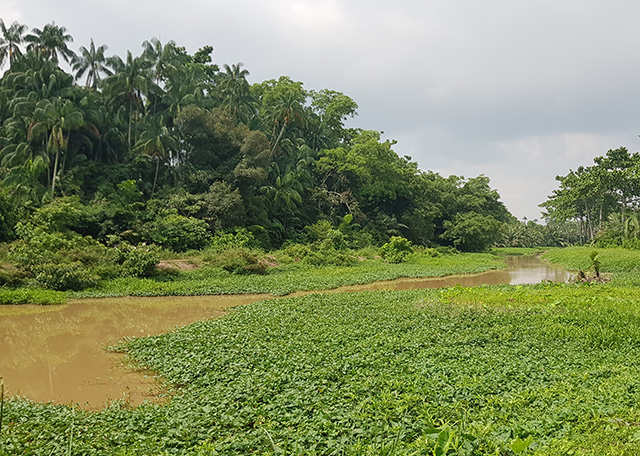 As I patiently waited for the distinguished visitor to reveal itself, I tried my best not to be distracted by other species present in the vicinity. But a little brown job flitting about the foliage of the forest could not be taken lightly especially at this time of the year. During passage, one has no idea what might decide to make a stopover at one of the few remaining forests in mainland Penang. Upon further scrutiny, it turned out to be an Asian Brown Flycatcher. It may be a common migrant to this part of the world but a confiding individual like this deserves some attention. 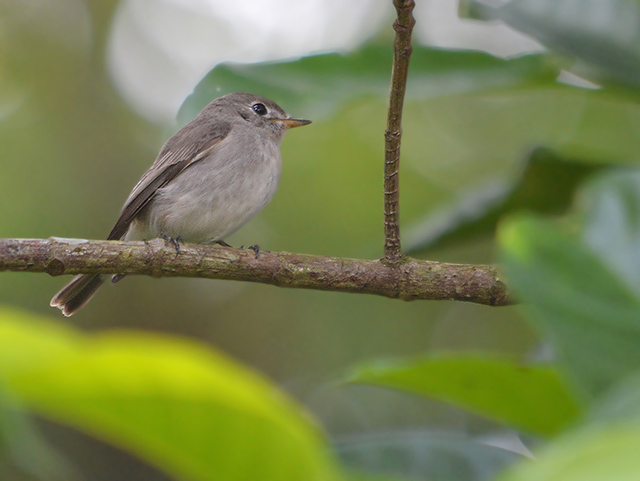 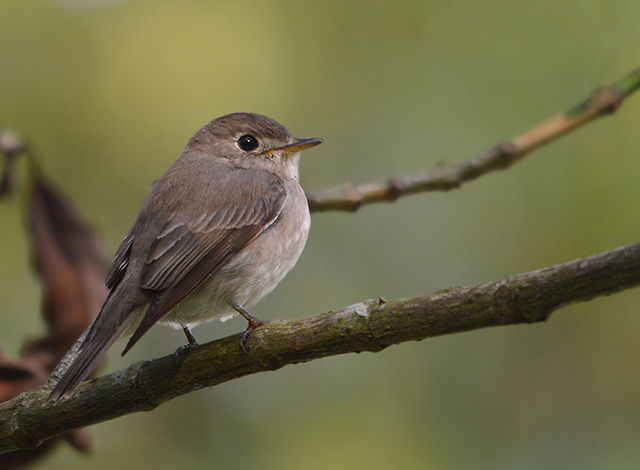 The resident pair of Mangrove Blue Flycatchers serenaded the locality with their pleasant territorial calls. The striking colouration possessed by these birds also helped to pass the time during my tedious wait for the Slaty-legged Crake. 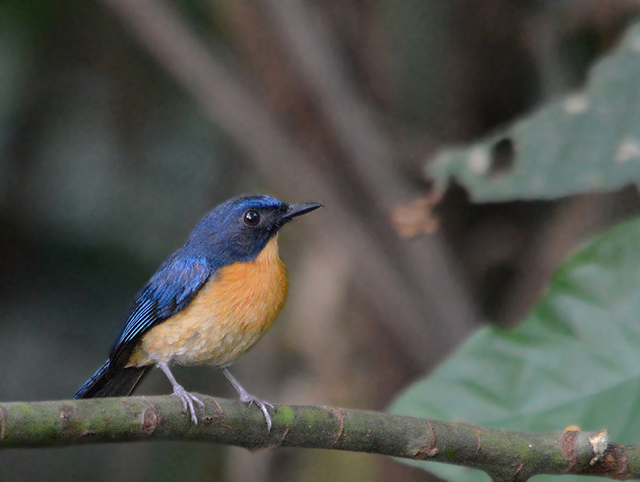 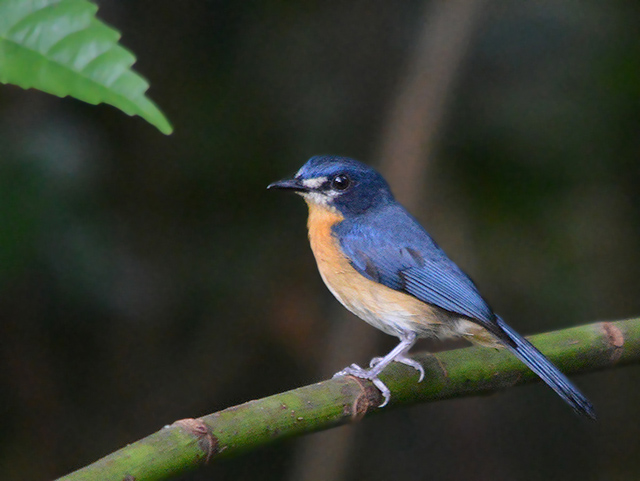 There is not much aesthetic appeal to be found on the Abbott’s Babbler but an adult bird with a recently fledged juvenile in tow indicated yet another successful breeding season for this robust undergrowth dweller. 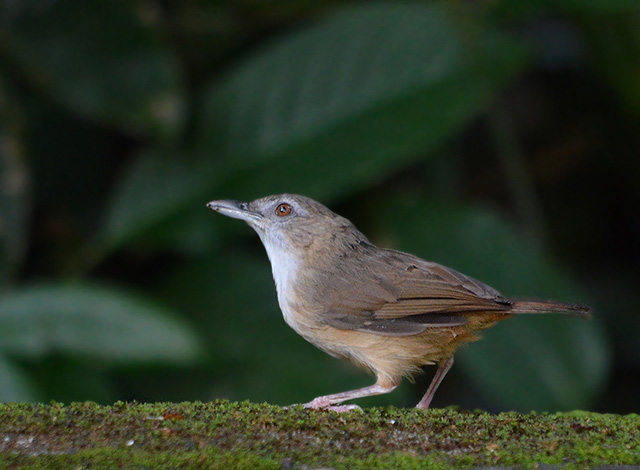 A Blue-winged Pitta in full view would have normally made my day because pittas are such amazing creatures. However, I was a man on a mission today and the stunning beauty of the Blue-winged Pitta did not have the usual influence over my emotions. 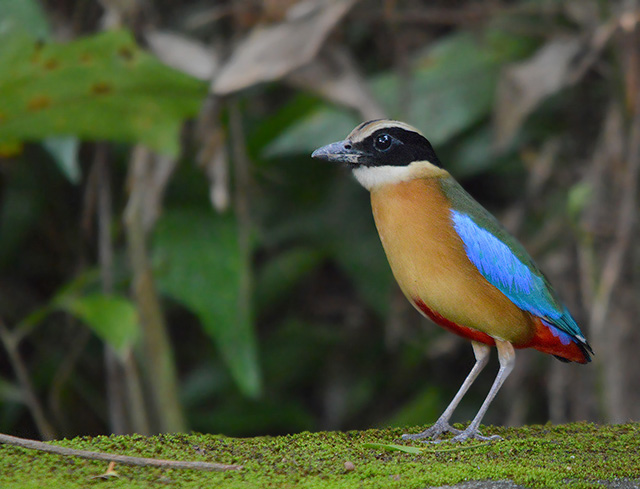 I sighed in relief when the Slaty-legged Crake finally strolled into view. It was a young bird as it lacks the colour intensity of the adult birds. Not that it mattered. I was transfixed on the rhythmic gait of the crake. The exhilaration was intense and I struggled to keep my hands steady as I accumulated digital memories of the encounter. 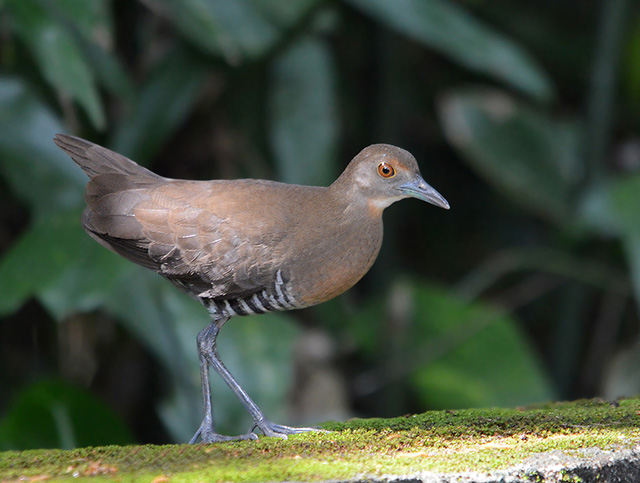 Almost as soon as it appeared, the rare migrant disappeared back into the swampy undergrowth and the performance was over. I managed to obtain the images I wanted but most importantly, acquired a lifer which is a rare thing for me nowadays. 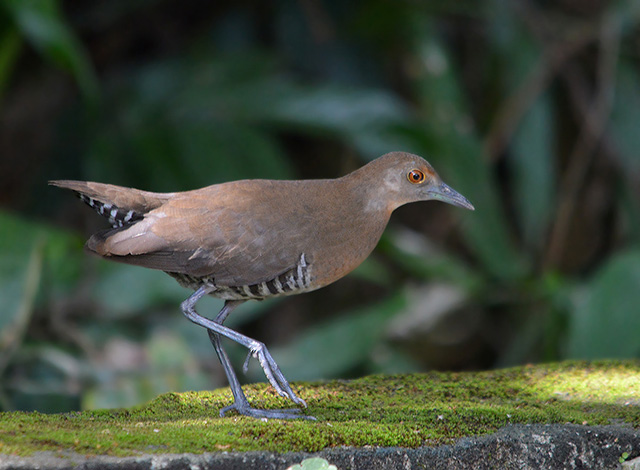 My companion and I decided the explore the surrounding areas but by then, the temperature had started to soar. A lone Dollarbird seemed unperturbed by the scorching heat and took no effort to seek some shade. Inevitably, the harsh lighting made photography of this attractive bird difficult. 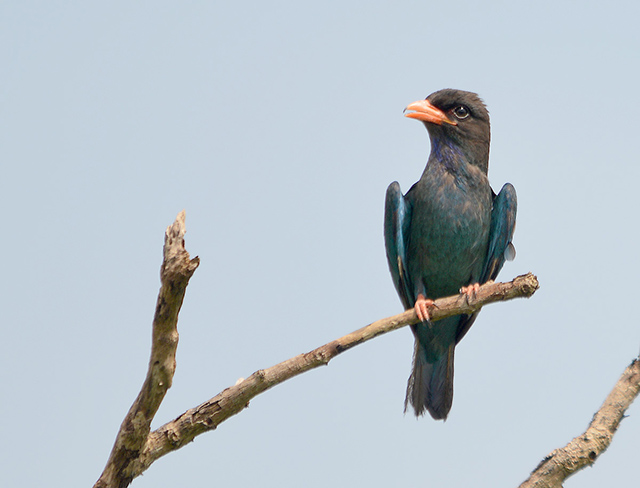 April is the best time to catch the Pond-Herons in their breeding plumages before they undergo the journey back north to breed. We recorded all three species on this trip but unfortunately, none were confiding enough for any memorable photographs. This mediocre image of an Indian Pond-Heron foraging in a sea of paddy stalks still managed to wriggle its way into this blog post. Being the rarest of them all has got absolutely nothing whatsoever to do with it. 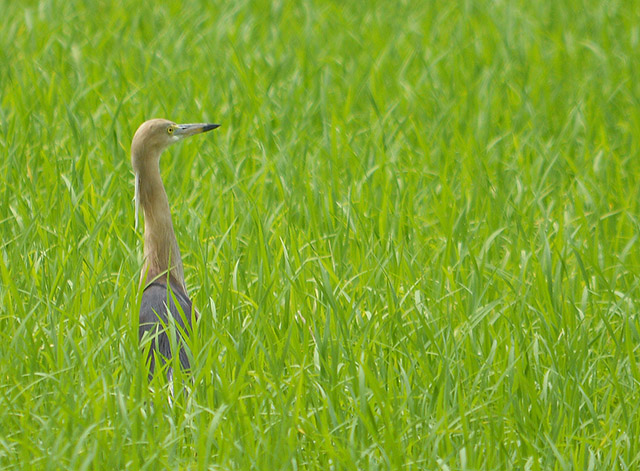 The scrubland habitat was ideal for Red-wattled Lapwings and we found several individuals in the vicinity. The absence of any other notable species cut short our exploration here and we turned our attention to the coast. 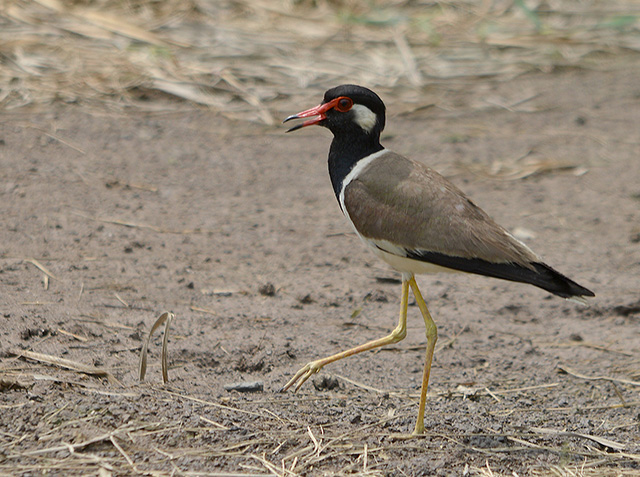 The timing of our arrival at Kota Kuala Muda was ideal with the rising tide pushing the waders and other water fowl to the high tide roost. However, it was a case of so close and yet so far. There was no safe walking access to the roost and inevitably, we made our way as far as the sandy beach was willing to take us. 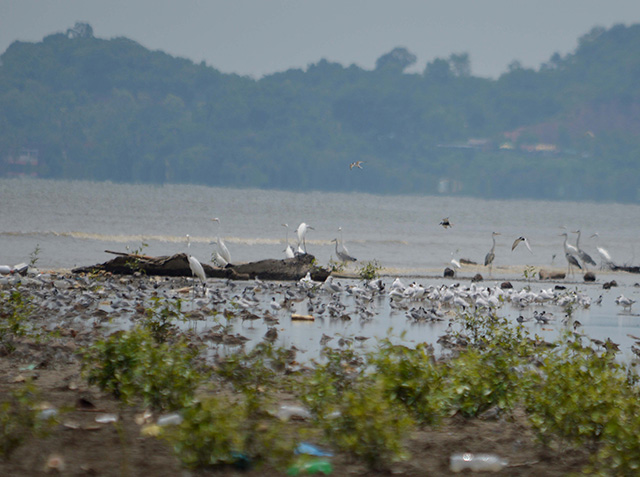 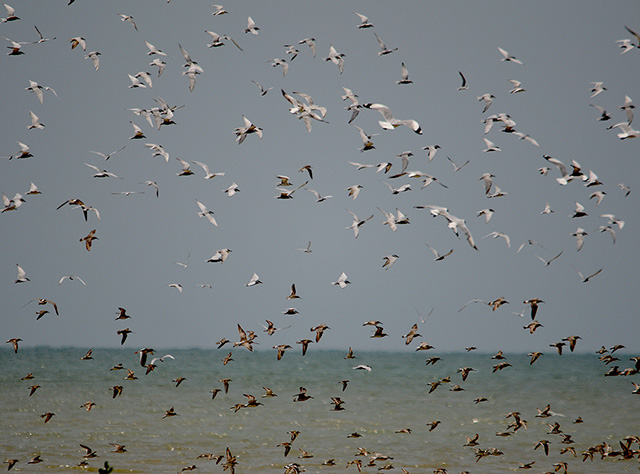 We had some consolation in the form of Common Terns. A few of these graceful coastal terns decided to roost on the beach and they provided the best photographic opportunities here. 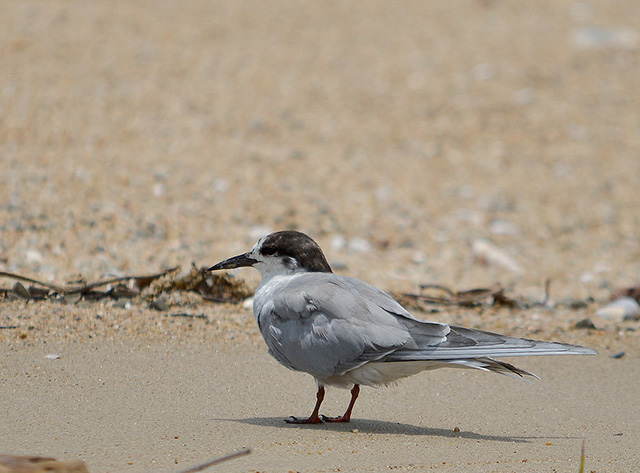 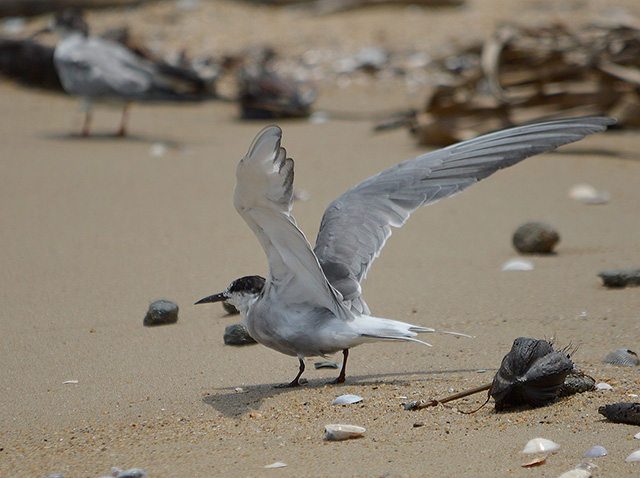 One of them has a deformed lower mandible but judging from its overall appearance, life goes on as normal for this determined individual. 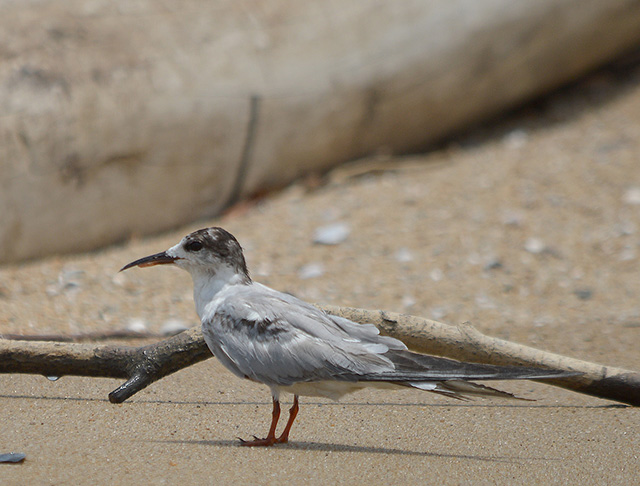 Some waders were also found roosting close to shore but the heat wave was too overwhelming for any decent photographs. Nevertheless, the sight and sounds of thousands of roosting water birds is always a breath-taking affair. As Hor Kee did a final sweep of the roosting flocks for any surprises with his scope, I took the time to enjoy the spectacle before we wrapped things up for the day. 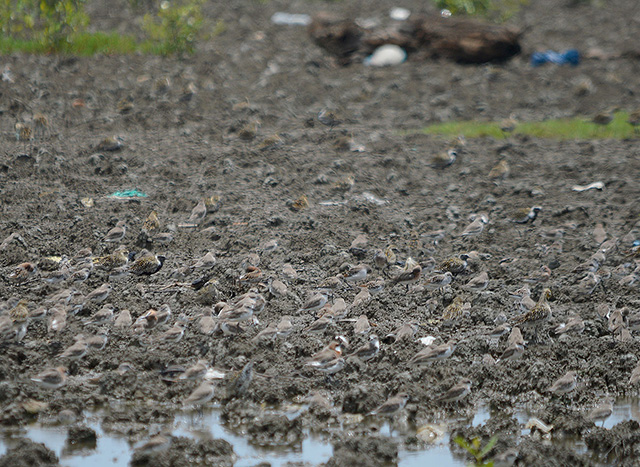 Congratulations Wai Mun on your quest for another lifer, this time of the Slaty-legged Crake. Ive never seen one before so I'm also grateful you share the great pictures of the event. We're at Heathrow airport right now, soon to fly back to Msia after a Msia covid closed doors for 2yrs. It'll be great to be back and do some birding again. Nice post once again :-)

Thank you, Kieron. Have a safe trip.