It will have to take a very special bird to get me to wake up a few hours earlier than usual on a working day and twitch for it before going to the office. The Horsfield's Bronze-Cuckoo is one such bird. Earlier in the week, at least 10 of these rare cuckoos were recorded in Singapore which is their highest count in history. Birders up north are hopeful for at least one of them to make its way up here and one certainly did. With only four confirmed records in Peninsula Malaysia so far, this austral migrant shook my world when a single bird was discovered by Hor Kee yesterday morning at the Pulau Burung Landfill in mainland Penang. Unlike usual migratory birds, this species migrates only at this time of the year to escape the harsh winter of southern Australia. The months of May to August are the best time to see them at their wintering grounds which rarely included Peninsula Malaysia. This cuckoo qualifies as a mega lifer for me but with only a window of one hour to relocate a small brownish bird among the dense scrubland of the landfill, it will not be an easy twitch. 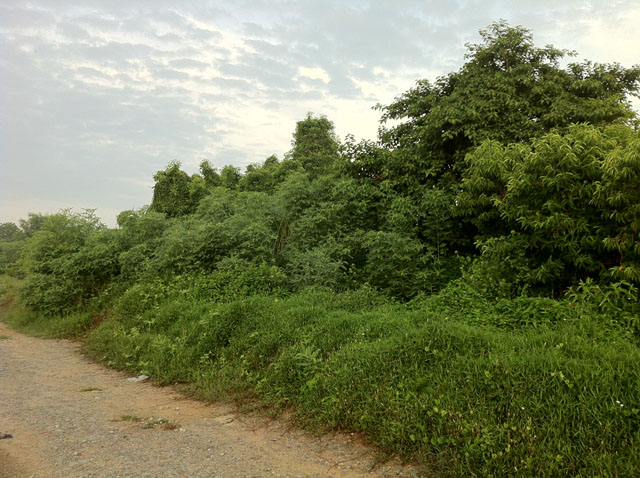 Despite Hor Kee and Choo Eng's pointers of the cuckoo's locality and habits, I had a tough time searching for my quarry. And to make things worse, time is a luxury I do not have today. With each passing minute, my optimism grew weaker and disappointment slowly crept into my soul. Just about then, a small brownish bird with longish wings and tail flew awkwardly above the scrubland and alighted not far from where I was. A quick glance with my binoculars confirmed its identity. What better way to start off a work day than with a successful twitch for a mega lifer. I heaved a sigh of relief as I captured my first ever image of the Horsfield's Bronze-Cuckoo. The 40-kilometre southward journey was certainly worth all the effort. 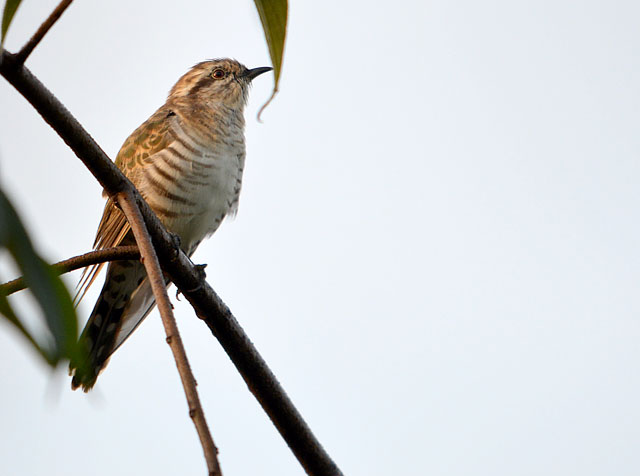 With the cuckoo in sight, I lost myself in the moment, as expected, and trekked off the beaten trail into the scrublands in my work clothes. The urge to get closer for better shots was simply too strong and a promise I made to myself to keep myself presentable for work was forgotten. By the time I realised it, my shoes and trousers were covered with earth, dew and grass seeds. But, I also managed to obtain much better images of this rare visitor and that was what matter the most. 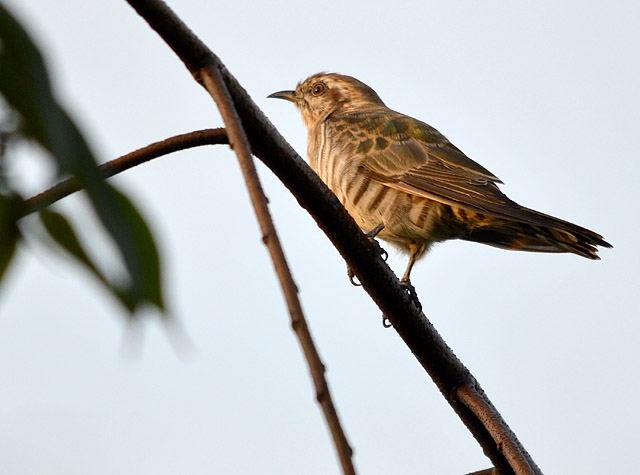 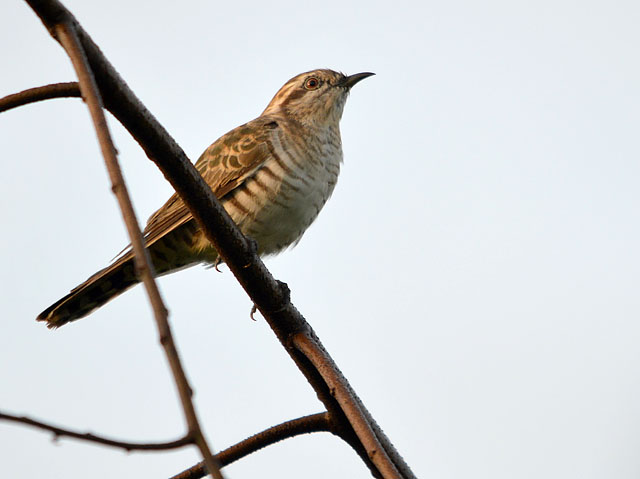 It was relatively easy to follow and observe the cuckoo due to its confiding and sluggish nature. There are times when it was constantly on the move and I can only assume it was foraging. It was also quite alert towards bigger birds flying overhead. A good look at the red iris indicated that it was a male bird. He was a handsome specimen with the greenish sheen above and the subtle barrings below. And of course, the diagnostic eye-stripe completes his look. A switch of location by the cuckoo resulted much to my advantage. I could then photographed him against the green background of the scrub vegetation and the excitement of this short but memorable trip escalated to a whole new level. 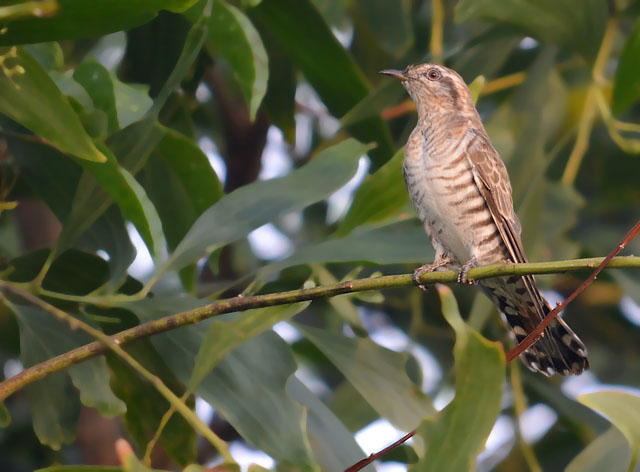 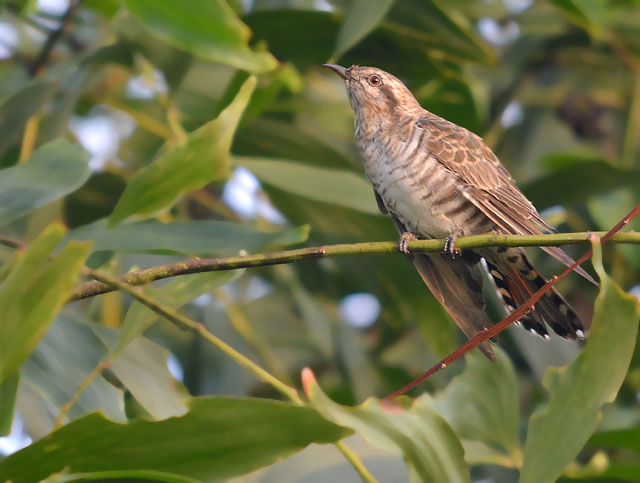 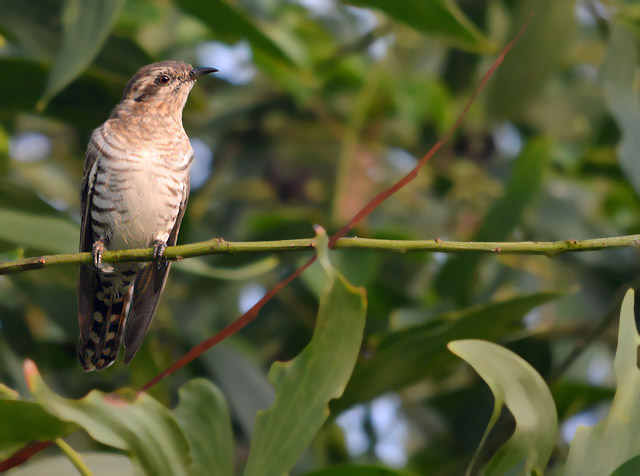 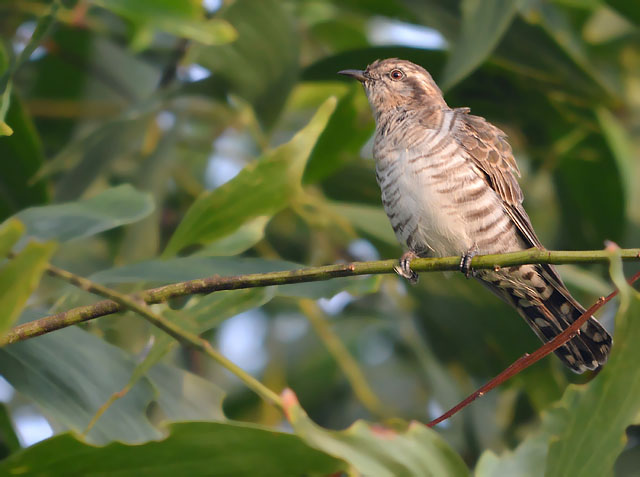 The cuckoo was also getting comfortable with my presence and much to my delight, started to preen and even showed off his chestnut outer tail feathers to a gawking Penang birder... 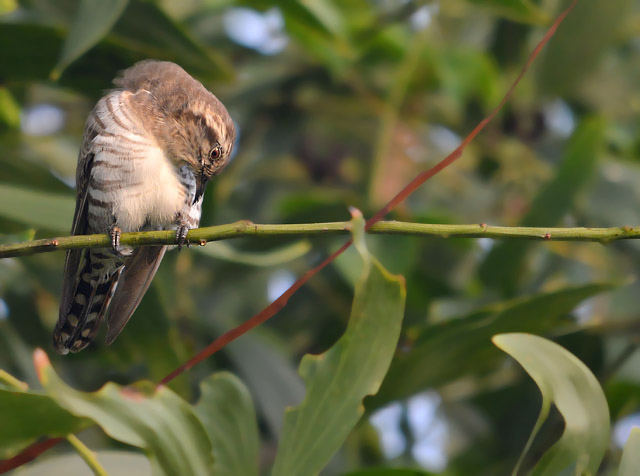 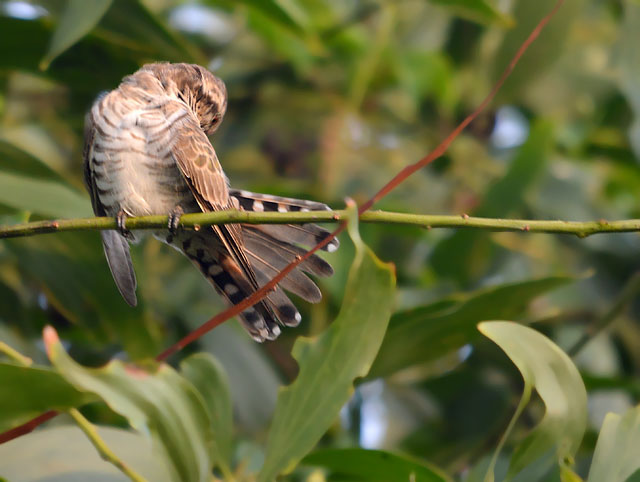 Some movement on a nearby bush distracted my attention momentarily. My hope for a second Horsfield's Bronze-Cuckoo was dashed when it turned out to be just a Zitting Cisticola. 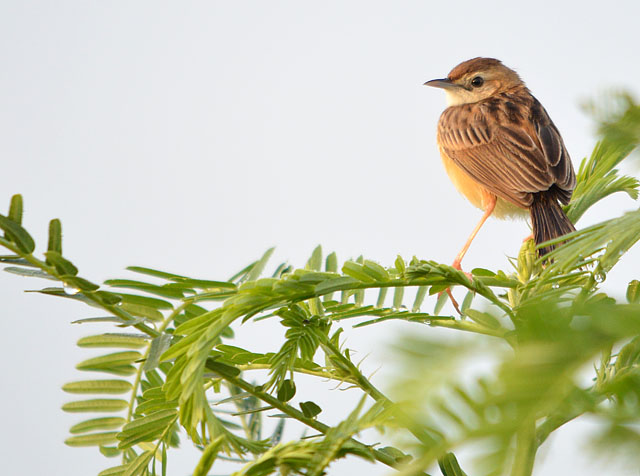 The cuckoo shifted one last time before he flew deeper into the scrubland. The choice perch this time was quite ideal because it was a dead twig and in good light. The timing for the cuckoo's departure could not have been any better as well. With it out of sight, I hastily started my journey back as I could still make it to work on time. It would have been a very different story if the cuckoo had stayed on and continued to mesmerise me with his presence. Back home my better half asked me what I would have done if I failed to find the cuckoo and that question required some thinking. After a significant pause, I replied that I would go to work when the time came regardless of the outcome of my search. I am not sure if she was fully convinced because I was not. Six months is a long time to go through without a lifer. Then came this cute, little Australian cuckoo that felt it was time to put some life back into my dormant life list. Thank you and welcome to Penang, mate! 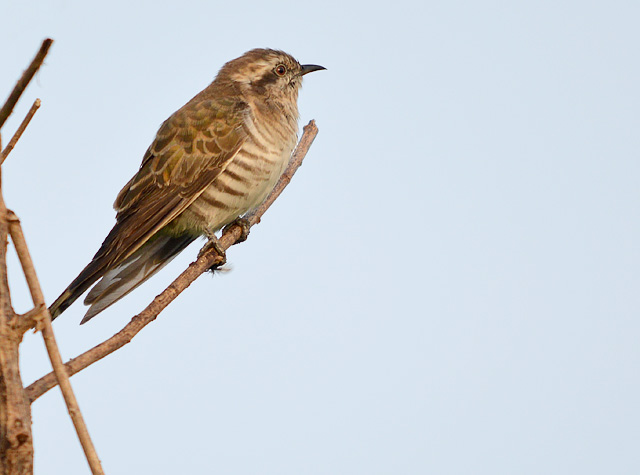 Wow! Congratulations on getting this rare lifer!

Thank you, Bob and Mike!

Such good images, too! That's how to see a lifer.

Not only did you get get great photos, but your narrative of this experience is exciting to read. I felt a vicarious thrill from reading about it. Congratulations on getting the lifer and getting to work on time.
A few days ago I got to see a bird from your part of the world here in Alaska, a Terek Sandpiper. Not a lifer, (I saw them in Thailand) but a good addition to my Alaska bird list.

Thank you, John. It worked out well for me this time. Looking forward to your Alaskan adventure post.

Congratulations on your "Lifer" !

A great bird and fine photos. I hope your boss understands your birding passion.

As long as it does not interfere with work, he's ok.

That was like striking a lottery Master Choy. An Australian bird has landed on Malaysian shores and it was recorded in this extraordinary tale. Congratulation on your effort for a lifer of a lifetime! It would be nice to find the Horsfield's Bronze-Cuckoo in scrublands in its own country. Let's see. But, for now congratulation again for this amazing discovery :)